Hello everyone! The January 2018 GSM has ended. Lots of exciting things happened, so let’s talk about them! This was a long meting, so it’s a long post… sorry ’bout that.

You can watch the public portion on YouTube here.

Guests are subject to additional scrutiny for now

Due to an ongoing incident with former members, Guests are currently subjected to additional scrutiny and restrictions:

Guests who have been banned by mistake should email admin [at] minecartrapidtransit.net to discuss their situation. Guests who would like to use chat, along with all the other features available to members, should apply for membership.

These extra restrictions will remain in place until further notice.

We are adding a few rules to boat lines to improve realism. The following rules are in effect immediately for boats used as transport:

Boats that are not in compliance have until March 1 to become compliant. Canal owners and city mayors are not required to modify their canals and bridges to accommodate you, but we encourage you to work together if necessary. (The burden of compliance lies with the boat operator.)

Additionally, note that seaplanes fall under the airport and airfield rules. Cities wishing to build seaplane bases must reach the Senator rank before doing so.

We are making tweaks to the lottery to increase jackpot sizes. The jackpot will now start at $100 (up from $20) and each player will be permitted to purchase up to 25 tickets (at $1 each). We may tweak these values further if necessary at future GSMs.

Frumple will be setting up the beta server in the coming days (watch the status page for updates) for everyone to test some new plugins:

We’ll post here once the beta server is up and running. Once it is, remember that all rules apply on the beta server, except that griefing is allowed in the context of experimentation and testing plugins. We’d love to hear your feedback – just email the staff if you’ve got thoughts on how we can improve the experience for everyone.

/rangedspy is now available for all staff

Mods now have access to the /rangedspy command, which allows them to monitor local channels from anywhere in the world. This command has historically been available only to admins.

This was a point of great discussion during the meeting. We interpret the local channel as a public forum that players can join without the knowledge of those actively involved in a conversation, similar to a project channel, and therefore the local channel falls under the jurisdiction of mods. (Real-time access to private messages and party chats is available only to admins.) Players wishing to maintain a private conversation with controlled access should do so via PMs or party chats.

The first is an extension that I’ll be building in the near future, that was actually approved last GSM, but we forgot to post it. The Western Line North branch and Expo West Extension (WLN and XWX1) will be the next lines to be extended, according to the image below (though final station alignments and numbers are subject to change). This line runs parallel to the Taiga Line at T31 to T36, but not T46-T50. As per usual, stations may not be claimed until the lines are officially opened; I will announce here when they are ready for requests. 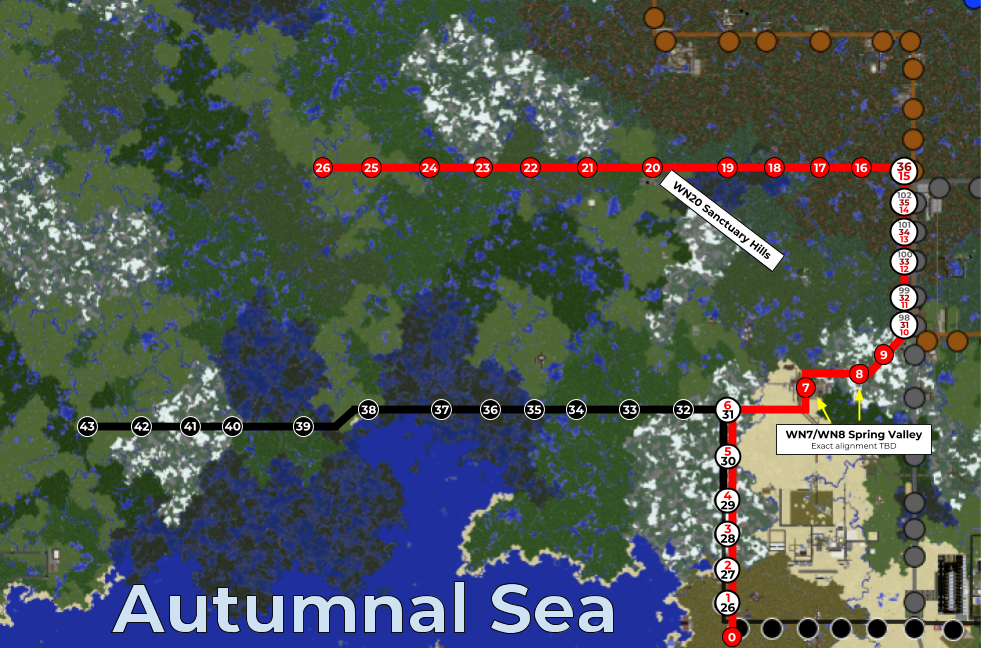 The next line to be extended after these will be the Valley Line. godzilltrain will be submitting a more detailed proposal for review at the next GSM.

We reviewed four road proposals during this meeting:

We considered proposals for the following town transfers:

LDShadowLord has been promoted to Premier for the City of Evella, and his acceptance speech is as follows:

Many have died, in the pursuit of perfection. But that was a risk I was willing to take.

Evella has been a journey, from the very beginning. Those that knew me before the switch to Gamma, knew that my city there was “Sublime”, a city very similar in style and scope to modern day Evella. With Evella I sought to finish what I had begun with Sublime, a modern, brutalist city. Quick to rise, faster to fall.

Evella is the combination of thousands of hours of my work, and others. Evella would not be the city it is today without the franchises that garnish the city streets, and the businesses that form the core of this financial behemoth. So thank you, to all of you who put up with my bullshit and put a Franchise in Evella despite my oppressive building regime. The city, nor the server, would be the same without you. And not you but thank you to the people who visit or present at the Evella Expo. I can promise that you have not seen the last of the Evella Expo, and I seek to make Evella the number one place to be for major events.

Thankyou for allowing me to be a part of this wonderful community, and thank you to the staff that voted me to this rank and giving me recognition for my labour of love.

And mine_man_ has also been promoted to Premier for his work on Elecna Bay, with the following improvised speech:

I’ve been on the MRT for just over three years now, and when I first joined I would never have expected myself to end up where I am. The people I’ve met on this server are some of the most amazing people, and some friendships I’ve made on this server are going to last way past the length that this server. To me that’s one of the things’t that’s the most amazing about this community, and some of the things people have said to me when I’m not in the mood to continue Elecna Bay and to get me to continue it, and now I’m Premier, I think I can really appreciate everything that everyone has said to get me to where I am now. So thanks!

Congratulations to the both of you!

Thanks to everyone who participated and voted in the Holiday Town Decorating Contest this last month! Congratulations to the following winners:

Prize money has now been distributed to all participants

Our next GSM will be held on Saturday, February 17, 2018 at the usual time of 7pm UTC. Topics, including cities wishing to be promoted to Premier, must be submitted by Thursday, February 15 at 7pm UTC.

While we will accept submissions in all topic areas, note that we are not actively seeking new moderators.

In addition to the next GSM there are a few other events happening:

Thanks all! As always, please contact your nearest staffer if you have any questions.
– Chief